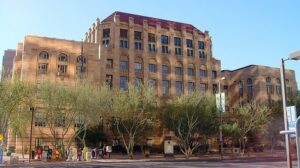 This past week the Unites States Supreme Court overturned the landmark case of  Rowe v. Wade, giving the individual states power to outlaw and/or criminalize abortion. Twenty-six states have already passed laws restricting access to abortion or making it illegal. Arizona is one of them.

In 1962 — eleven years before Rowe v. Wade – Arizona was at the center of a national firestorm regarding the issue of abortion. The controversy raged around Sherri Finkbine, a local Arizona television host on the kiddie program, “Romper Room.”  I was a young kid at the time and, like many other children, had grown up in Phoenix watching the show.  I still remember the kindly Miss Sherri, with her magic mirror, her pretty smile, and her soothing voice.

The problem began when Sherri’s husband came back from a trip chaperoning high school students on a European tour.  Sherri was pregnant with her fifth child at the time; and when her husband returned he brought with him a bottle of pills to treat her morning sickness.  Neither Sherri, nor her husband, were aware that the medication contained Thalidomide, a popular drug in Europe and other countries, but one which was not widely used in the United States.  During the early stages of her pregnancy, Sherri took thirty-six of the pills.

That’s when the nightmare began.  News reports began filtering into the United States that Thalidomide had been found to cause horrific birth defects in fetuses.  The media reported that Thalidomide babies were being born without arms or legs.  Sherri and her husband checked the medication that she had been taking and were horrified to discover that it, indeed, contained the dreaded Thalidomide.  In an instant, their once-happy lives were turned upside-down.

Sherri’s physician discussed the almost certainty of incapacitating birth defects that the poor child would have to suffer for a lifetime, and he strongly recommended that she obtain a therapeutic abortion.  However, abortions were illegal in the United States. The woman who obtained an abortion, and the person who performed it, could both be subject to criminal liability and incarcerated. The alternative, one which some women chose at the time, was to have a secret “back-alley” abortion.  These were highly dangerous procedures, often performed by unethical and incompetent doctors out to make a buck, and even by people with no medical training at all.  As a result, it was not uncommon for women to contract infections and become seriously ill, or even die, following abortions.  That was life in 1962.

Sherri contacted a friend who worked at a local newspaper.  She was concerned that other women who were taking — or might take — Thalidomide should be warned.  She was promised anonymity.  After doing what she considered to be her civic duty, Sherri prepared herself for an abortion.  But when the newspaper article hit the streets, her identity was disclosed.  The hospital at which the abortion was planned backed off.  Fearing bad publicity and possible prosecution, it canceled the procedure.  Sherri’s physician asked for a court order to proceed with the abortion, and that’s when all hell broke loose.

Overnight, Sherri Finkbine, her husband, and her four children became public figures.  Sherri was fired from her job at the television station.  Her children were tormented and bullied mercilessly at school.  Letters and hate mail came pouring in from all over the country, including more than a few death threats.  Ultimately, the FBI had to be brought in to protect the family.

Now desperate and terrified, Sherri attempted to travel to Japan to obtain an abortion but was denied a visa by the Japanese Consul.  Ultimately, she flew to Sweden, where a successful and legal abortion was performed in the twelfth week of her pregnancy.  The Obstetrician who performed the procedure later told Sherri and her husband that the fetus had no legs and only one arm, and was too badly deformed to be identified as a boy or a girl.

Sixty years later, the controversy over abortion is still raging.  Now that Rowe v. Wade has been overturned, the privacy rights it ensured giving women control of their bodies have been eviscerated. Abortion is now illegal in many states, even in cases of rape and incest. The consequences will certainly be far-reaching and many lives will be affected. Others will be lost.

Our nation has become bitterly polarized over this issue. We are sure to see a battle raging for years to come. In the end, that battle will be won by the side that makes the best use of the most powerful weapon any individual has in a democratic society. No, not guns. — Votes.

At the law firm of Gary J. Frank P.C. our Arizona Family Law Attorneys, Gary Frank, Hanna Amar, and Logan Matura are strong litigators and compassionate Counselors. Gary Frank is a Phoenix Family Law Attorney with 40 years of experience as a litigator and mediator. he has also acted in the capacity of a Judge Pro Tempore in the Maricopa County Superior Court and served on the Governor’s Child Abuse Prevention Task Force. Law firm partner, Hanna Amar, is a highly-skilled Arizona Family Law Attorney with a passion for Family Law children’s issues. She has extensive courtroom experience and is also a certified Mediator. Hanna has also acted as the President of the Young Lawyers Division of the Maricopa County Bar Association, and was recently named as an elite Super-Lawyer. Associate attorney, Logan Matura, is an Arizona Family Law Attorney who received her Juris Doctor degree from New York Law School in Manhattan, NY. While in law school she served as an intern for a Family Court judge in the Bronx, NY, and was a member of the Family Attorneys Mobilizing Club. Our firm handles Family Law cases in the areas of divorce, custody (now called “Legal Decision-Making and Parenting Time”), relocation (move-away), division of property, spousal maintenance and child support, modification actions, enforcement actions, grandparent, step-parent, and non-parent rights, as well as other matters pertaining to families and children. If you are in need of a consultation, call us today at  (602) 383-3610, or you can contact us by email through our website at www.garyfranklaw.com. We look forward to hearing from you.